“I can’t tell him anything,” Johansson says of Jost.

While many Marvel fans would die to hear secrets about the MCU before they are officially revealed, there’s one person with a direct connection to Scarlett Johansson (AKA Natasha Romanoff/Black Widow) who isn’t a fan of spoilers.

During an appearance on Thursday’s episode of Sirius XM’s “The Jess Cagle Podcast with Julia Cunningham,” the actress revealed that her husband Colin Jost hates spoilers and wouldn’t even read lines with her during the filming for “Black Widow” unless he knew they didn’t reveal secret plot details. 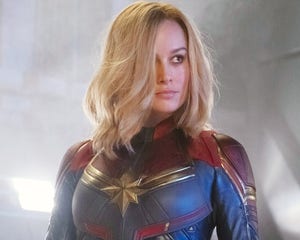 Cagle brought up the topic, asking Johansson who in her life gets “most excited” to learn MCU secrets and information. He suggested Jost would be one of them, noting that the “SNL” star seems like he could be “a comic book nerd.”

“I think he read comics growing up … He was a big Wolverine fan,” explained Johansson, 36. “He doesn’t like any spoilers though, so I can’t tell him anything. And he doesn’t even pry. … When we were shooting [“Black Widow”] in London, Colin was also there. He was shooting ‘Tom and Jerry,’ which worked out great ’cause we were together in the same city for a long time, which is rare.”

“If I was in the middle of a big action set piece or sequence or whatever, he couldn’t hear — he was just not wanting to hear anything about it,” she continued. “… Of course, he wants to know how was your day, but as soon as it would bleed into, ‘Can you read the scene with [me]?’ He was like, ‘Am I going to get any spoilers? He wanted to know spoiler alert before we read lines together. Can you believe that?”

Meanwhile, the two-time Oscar nominee also opened up about her friendship with Chris Evans. The two have starred in eight films together, including six MCU movies. Johansson and Evans, 40, first shared the screen in 2004’s “The Perfect Score”.

“I’ve been very close with Chris for such a long time,” Johansson told Cagle. “The first time we worked together, we did a movie called ‘[The] Perfect Score’ when I was 17. Chris I think was 18 or 19. And we were in Vancouver for whatever many months. It felt like the closest thing I ever had to a college experience because we were a group of us there just kind of staying in the same hotel and working and going out and it was a lot of fun.”

“I then had the opportunity to work with Chris again in ‘The Nanny Diaries,'” she continued. “Chris and I, we just laugh so much together. … I think [we both] find a lot of humor in things that are ironic. We just have a great friendship.”

Johansson — who reprises her role as Natasha Romanoff/Black Widow in the upcoming film “Black Widow” — pointed out that there are similarities between her off-screen friendship with Evans, who played Steve Rogers/Captain America in the MCU, and their characters’ dynamic on-screen.

“I think similarly to Steve and Nat, we spend a lot of time talking about relationships,” she explained to Cagle. “We spend a lot of time talking about our families, other people’s relationships, like all of it. We could talk for hours and about all kinds of stuff. I think in a way the sort of like big sister relationship that Nat has sometimes with Steve, I think — even though Chris is a couple of years older than me — but I think we sort of have that same dynamic.”

“Now I’m realizing as we’re talking about it, that all my friendships are mirrored in the Avengers universe, which is so funny,” Johansson added with a laugh. “I mean, I think that’s how we are as actors, right? … You bring it to the work and in this case we were so lucky because we all love each other so much and we’re like this weird dysfunctional family.”

Zack Snyder has revealed that there was actually a culminating installment he wrote to conclude the storyline he started with the film 300....
Read more
News

To Pay Off A Massive Inheritance Tax Bill, The Billionaire Samsung Family May Liquidate An Incredible Art Collection

The Falcon and the Winter Soldier has quickly become one of my favorite Marvel shows, and it's not just...
Read more
News

Jem Wolfie net worth: Jem Wolfie is an Australian model and social media personality who has a net worth of $8 million. She...
Read more

Ranked: All The Villains So Far In The Walking Dead

Shahadi Wright Joseph on Them and Being a Role Model

Woodstock ’99 was supposed to be sex, drugs, and rock & roll. Instead, what we got was three days of mob violence, sewage...
Read more
News

The Goldbergs Renewed For Season 9 At ABC

Joni Mitchell has shared a previously unreleased live rendition of her song, “The Dawntreader,” recorded by Jimi Hendrix in 1968. The song will appear...
Read more
News

Piers Morgan’s Good Morning Britain co-host didn’t mean to scare him off the show! As we reported, the controversial media figure resigned from the...
Read more
News

Myself, Brendan and Sean Are Still Ready

Pauly Shore is celebrating the 29th anniversary of Encino Man by once again teasing a sequel. Directed by Les Mayfield and starring Shore...
Read more
News

There's no denying that 2020 was a difficult year for the movie industry (and everyone else). With theaters closed, a number of films...
Read more